Benefits of Utilizing Social Media in the Health Care Industry

Healthcare is one of the top industries attracting a large audience on social media. 34% of consumers consume social media to search for health information, according to research data from How America Searches: Health & Wellness by iCrossing and Opinion Research Corporation.

Hospitals and health providers which began utilizing the power of social media to grow their business reported an increase in sales and even an increase in the number of loyal customers. The results prove how powerful and beneficial social media is for the healthcare industry. Many medical institutions are starting to rethink their marketing mix and include social media.

For the hospitals and health providers who aren’t convinced yet with what social media could bring to your business, check out the list of benefits below when you opt to utilize social media.

The internet is full of insufficient medical information, which is being consumed by a lot of healthcare patients around the globe. These patients are putting their health in line as they trust the information they read online, not knowing that it aren’t true. Now, the incredible opportunity for healthcare organizations is to use social media to disseminate the accurate and actionable medical information people need.

A great example of social sites using the power of social media to disseminate medical and health information to patients and people concerned is Inspire. Inspire provides a forum where patients can share their health problems and treatment questions with other patients and qualified medical personnel.

The good thing about Inspire is that they partner with trusted health nonprofit organizations to ensure that the information they share with the people concerned is accurate and community safe.

A cost-effective way to promote messages

Microsoft’s Dr. Bill Crounse has said during the Meet Bloggers forum that social media is the most cost-effective way to promote a message. Savvy marketers already know of this fact. That’s why there were the first ones to utilize social media. However, social media can go beyond a health organization’s marketing department as they can provide an incredibly cost-effective way of monitoring and dispensing healthcare services.

There are many instances when industries outside of healthcare are being used as guinea pigs for technological advances, which will be later used in the healthcare industry. In countless cases, social media between companies and consumers leveled its playing ground.

What companies are doing nowadays is vigilantly perusing social media networks, tracking customer sentiment around their brand in hopes that they can react. Other things they do is to leverage the power of social media offensively to build brand awareness, innovate and prove thought leadership.

Suppose there is one health marketing success story that leveraged social media to build brand awareness that deserves to be told here. It’s the marketing campaign done by Mayo Clinic. The Mayo Clinic 2005 began utilizing three major social media channels, namely Facebook, Twitter, and YouTube, to promote and increase downloads of their podcasts.

According to a Middleberg Communications survey reported by PRWeek, 70% of journalists now use social networks to assist them in reporting, 30% less than the figures given the year before. These high numbers have convinced healthcare marketers around the globe to leverage social media channels for them to achieve coverage not only by mainstream media but the industry publications as well.

The marketing efforts healthcare institutions and organizations can use can include social media channels such as blogs, microblogs, and forums – avenues where health marketers can share success stories, let’s say, from ordinary operations or treatments, medical research, or other significant achievements.

Aurora Health did a great example of a successful social media campaign, wherein they tweeted a knee operation back in April, and it received significant media attention from both mainstream media and industry publications with the likes of Good Morning America, Hospital Management Magazine, and a local public radio network at Milwaukee. 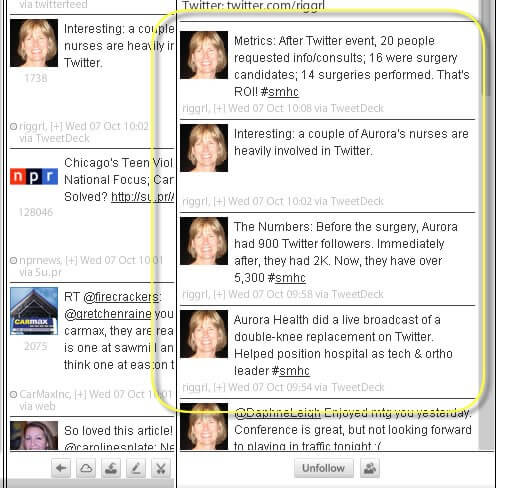 Communicate in Times of Crisis

We can never know when a disaster may come. Still, in times like this, healthcare providers can leverage social media networks such as Twitter, Facebook, Google+, and the likes to provide real-time updates for those directly affected by the crisis and those who are watching from afar and would like to help.

You may remember the November Fort Hood shooting attack five years ago, which fatally shot 13 people and left 30 others injured. Steven Wildman of Scott & White Healthcare, one of the hospitals that treated and cared for Fort Hood victims, utilized the microblogging site, Twitter, to provide up-to-minute news to the public. With Twitter’s availability, Wildman could provide updates on emergency room access and hospital operation status and re-tweeted information from Red Cross, and communicate with reporters.

More and more hospitals and health providers are beginning to recognize the potential impact of utilizing and leveraging social media channels from Facebook, Twitter even to YouTube to complement training efforts.

For example, the social media manager of Mayo Clinic, Lee Aase, incorporated social media into a training presentation he prepared for local chapters of the American Heart Association. During his production, Lee Aase utilized Twitter to encourage participants to contribute and join in the discussion using the #AHAchat hashtag.

With the use of social media channels, healthcare has opened up an area only available to a selected few: the operating room. Tweet a live procedure done by Henry Ford Hospital created a buzz last February. Doctors, medical students, and curious non-medical personnel, along with surgeons, used Twitter to give short updates on kidney surgery to remove a cancerous tumor.

Shiela Flakes is a Principal Research Associate at Plagtracker Though her dream is really to become a literature teacher. Reach her through Google+ and start a conversation.